During my recent trip to Rome, a friend and local recommended Hostaria Dino & Tony, the selling point was that it is affordable, great quality and traditional Roman fare. Without knowing it, my friend gave a description that perfectly aligned with what I like most about Roman food, so I was excited to give it a try!

While I am still learning to speak Italian (slowly), I usually feel fairly confident in a restaurant. Tonight, however, I was tired and Dino (or Tony, not sure which) greeted me, sat me down and asked if I wanted some wine with blinding speed. I was so overwhelmed that I think I said I wanted both Red and White wine. I didn't, he understood and returned with a delicious half-carafe of Vino della Casa and water. 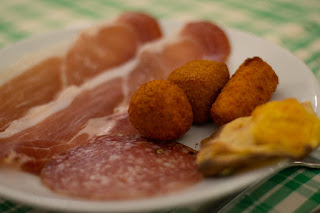 I hadn't realized that this hostaria didn't see the need for menus. I'm sure I was asked what I wanted to eat, or at least if I wanted what they were making, but all I'm certain of is that I confirmed I was interested in an antipasto, so I was brought one. There were two plates, as if I was eating for two, which is a theme that would be repeated.  The first was a collection of sliced meats, and a few fried bits.

Conveniently, this was something I probably would have ordered, given the chance, so I dug in and enjoyed the entire plate. This seemed like a reasonable amount of food for an antipasto platter for one, so imagine my surprise when the next plate came out. It was what I would best describe as a pizza divided into sections with different toppings on each. There was one section of vegetables, broccoli I think, a couple of different cheeses and a section of marinara sauce. I ate it all, and trembled with fear when I realized there were more plates still to come!

Continuing with the theme of eating for two, my pasta course surprisingly included both a Red and a White pasta. The white was a delicious Pasta alla Gricia, which if you were as unfamiliar as I was, is similar to Carbonara, but without the egg. 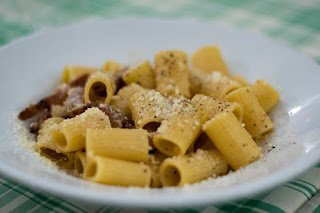 I'm not sure if  my picture is doing it justice, but it was delicious, creamy and the pasta was cooked to a perfect level of al dente. The guanciale was delicious and I couldn't have been happier. The bowl size seemed typical for Europe, and Italy in particular, for a pasta dish. Imagine my surprise when I was greeted with a second bowl of pasta. I'm not certain of the name of the dish, but it was a pomodoro sauce also with guanciale and cheese. Delicious as well, but I was really getting full. 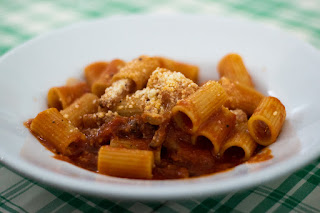 After I struggled to complete both bowls (I'm no hero!), a younger waiter (i.e. not Tony or Dino) was confused when I declined a Secondo Piatto. I was a bit unsure what I said and wondered if I misunderstood something. The sizes of meals in Italy are typically well portioned. I certainly don't leave a restaurant hungry, but I'm also rarely stuffed. This night was an exception. I couldn't eat another bite, somehow conveyed that to the waiter, and ordered a coffee. It was close to 9:00pm, and even though coffee might keep me awake, I'm no savage and I appreciate the finer points of Italian culture, so I drank what was probably my tenth espresso of the day.

As an expectation, it was suggested I would get a great meal for around €30, and I was not disappointed. I believe the bill was exactly €30, an oddly round number, and worth every penny. It was delicious, a surprise and I highly recommend that you check it out, especially if you are near Il Vaticano or the Ottaviao Metro stop.