So my week in Trieste (October of 2018) was mostly taken up with the 3 day Trieste Espresso Expo (which fyi, only happens once every two years so the next one will be in 2020 in case you're interested).  BTW, the Expo, while a trade show, had people there who were not in the business...students, families with strollers, etc.  The reduced entry 3 day ticket was 21 euro so a day pass without the reduced price couldn't have been more than 10 euro.

When I wasn't at the show, I managed to squeeze in a couple of the sights below but there was so much more I wanted to do but didn't have time for.  Drop me a comment if you've been to any of these sites or have other ones I need to hit next time!

This was totally worth the trek outside of the city.  You had to catch the number 6 bus (there's a stop at the train station, Trieste Centrale) although I caught it closer to my B&B (you can read my review of this amazing place on TripAdvisor).  It was about a 30 minute bus ride and you get off at the end of the line, before the bus heads back to Trieste.  You get off in a marina with a couple of restaurants and you have to go past the restaurants and take a left and go up the stairs.  That takes you in to the gardens of the Castello.  Then if you follow the paths along the water, you'll eventually end up at the Castle. 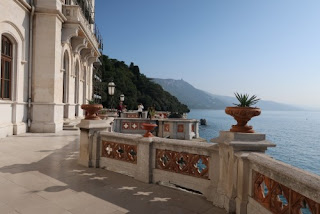 I paid the 12 euro to tour the castle itself but didn't opt for the tour or audio tour.  There was signage throughout that was also in English so I was able to get a sense of the history and of those who had lived there.  The view from the grounds and castle were truly spectacular, every vista was Instagram worthy!

There were bathrooms that were outside the castle, down the stairs (to the right of the castle if you're facing it) and around the semi-circle to the right.  There was also a cafe that was about a five minute walk from the castle (you might pass it on your way from the bus stop to the castle) where I sat and had un panino e un po di vino bianco (Friulano, my new favorite from that region). 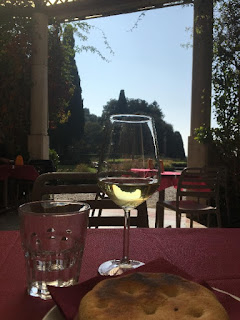 The whole round trip was probably around 4-5 hours, depending on how much time you spend on touring and wandering the expansive grounds.  If you're in Trieste, do it!

This is the hub of city, a place everyone comes to, tourists and locals alike.  If you're a tourist, there are pictures to take, coffee or aperitivi to sip or the tourist office to visit.  Locals use it as a meeting point or as a place to let the kids run around a bit before heading to dinner.

I had un aperitivo one afternoon at Caffè degli Specchi and it was such a treat!  The people watching was a great way to pass an hour or two while snapping pics and relaxing.  I ordered an Aperol Spritz, tramezzino and water.  Because it was aperitivo time, they brought everyone a jar of potato chips and a plate of three small sandwiches (so I could have passed on ordering the tramezzino but who knew!). 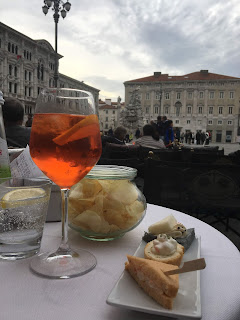 There's also a live webcam that looks down onto the piazza so we set up a time for Beppe to see me in real time!  I was a bit small, standing next to the lamp post but he could tell it was me. 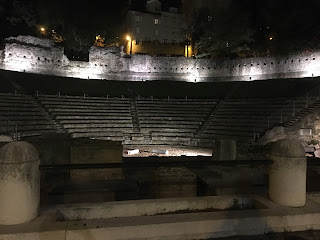 Although I'd read this was in Trieste, I came across it as I made my way to my B&B.  This is something I love about Italy, the notion that you can just turn a corner and see a piece of history there!  There's a grocery store next to it which I stopped in to get some water but I returned at night to see it all lit up, super cool! 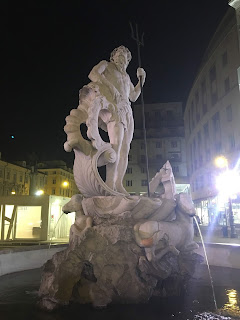 This piazza ended up being my center as it was close to the B&B (and next to Piazza Unità D'Italia) but it also had shops, restaurants and most importantly, the TIM store where I got my SIM card.

A couple of nights I sat outside with the rest of the Triestinos and had my apperitivi; I ducked into a few of the shops to try on shoes or look at scarves; I had dinner one evening; I went souvenir shopping.  There are statues, a fountain and the old stock exchange building so it's a great place to get some pictures as well.