Thanks to the 2018 Trieste Espresso Expo, I now know a few things about the lovely city of coffee, Trieste, Italy.  Let me break it down for you fellas...

The airport in Trieste is TINY.  Like one small terminal, about 6 check-in counters and one place to grab a bite to eat.  Because of that, it's super easy to navigate!

I arrived, headed downstairs, bought my ticket for the train into Trieste at a machine (4,05 euro) and headed to the train station. This was the only trek to be made.  Once you exit the the terminal following the signs to the train station, you'll have about a 10-15 minute walk, complete with people movers.  There are also ticket machines on the tracks in case you missed the one in the terminal.  A reminder to validate that ticket in the machines on the platform before boarding the train.  There's generally one stop (Monfalcone) before you reach Trieste Centrale and the journey is about 30 minutes total. 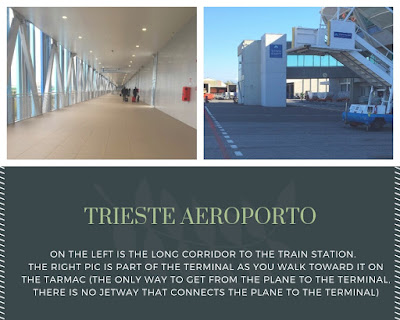 I contemplated flying into Venice and then taking the train to Trieste (about a 2 hour ride) but decided the additional traveling was not worth my time.  Lufthansa and Alitalia are the only carriers that will get you there from the U.S.  I flew Lufthansa from Boston to Munich, Munich to Trieste.  The Munich to Trieste hop is shown as 1 hour but each way was 35 minutes.  Smaller, regional jet plane but not tiny.  Not a super bumpy ride either which is what I'd feared.  And the cost difference of flying into Trieste directly versus flying into Venice and then training over was negligible once you factored in time as well.

If you're planning on purchasing a local SIM for your cell, you won't be able to get one at the airport or at the train station so you'll need to go to a TIM or 3 or Wind or Vodafone store to do that.  I chose the TIM store in Piazza della Borsa as it was close to my B&B but they have multiple locations and their plan for visitors is 26 euro and gives you 4 gigs of data.

The train station to Piazza della Borsa is about a 15 minute walk but being exhausted from the flight and having bags to deal with, I opted to jump in a cab at the train station instead (about 6 euro).  I hated not having service on my phone (unless I was connected to wifi) so getting my SIM was my first priority.

The BEST decision I made during this whole trip was staying at B&B Petra. 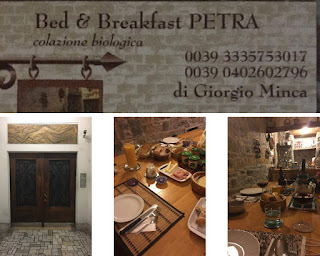 You can see my full TripAdvisor review for more details but here are some highlights.  It's run by a retired Giorgio and his daughter Chiara who are both the nicest people you could ever meet.  They're happy to do anything they can to make your stay better and the included breakfast is outstanding with lots o' choices.

They have 3 rooms total and all have private bathrooms (yay!).  Great bed, water pressure, value and location were other highlights.  Fingers crossed they have availability when you'll be there because they seem full much of the time!